This isn’t a huge surprise, but the Washington Post is reporting that US federal prosecutors havefiled a sealed criminal complaint against Edward Snowden charging him with espionage under the Espionage Act, along with theft and conversion of government property — and have asked Hong Kong authorities to detain him. Just this morning, we were discussing the Obama administration’swar on whistleblowers, prosecuting six different whistleblowers under the Espionage Act, twice the number of all other presidential administrations combined. Now we’re up to number seven apparently. Update: The complaint has been unsealed (also embedded below).

Did Snowden break the law? Possibly — but charging him with espionage is ridiculous, just as it has been ridiculous in many of these cases. Snowden wasn’t doing this to “aid the enemy” but to alertthe American public to the things that the administration itself had been publicly misleading to downright untruthful about. His actions have kicked off an important discussion and debate over surveillance society and how far it has gone today. That’s not espionage. If he was doing espionage, he would have sold those secrets off to a foreign power and lived a nice life somewhere else. To charge him with espionage is insane.

By filing a criminal complaint, prosecutors have a legal basis to make the request of the authorities in Hong Kong. Prosecutors now have 60 days to file an indictment, probably also under seal, and can then move to have Snowden extradited from Hong Kong for trial in the United States.

Snowden, however, can fight the U.S. effort to have him extradited in the courts in Hong Kong. Any court battle is likely to reach Hong Kong’s highest court and could last many months, lawyers in the United States and Hong Kong said.

It also notes that while the US and Hong Kong have an extradition treaty, there is an exception for “political offenses.”

While this certainly was not unexpected, it’s still a disappointing move from the administration. The crackdown on whistleblowers does not make the US look strong. It makes our government look weak, petty and vindictive in the face of actual transparency. It’s shameful.

via Death of the US Constitution: Can Americans Escape the Deception?.

Death of the US Constitution: Can Americans Escape the Deception? 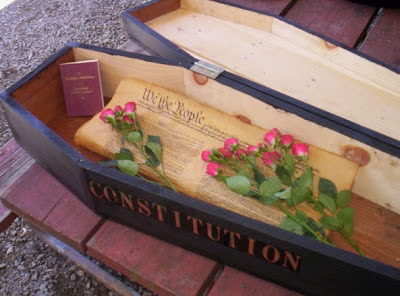